Controls are visual objects associated with the map and intended for interaction with users. In most cases, controls are placed in the map viewport.

The Yandex.Maps API includes several built-in sets of controls (for small, medium, and large maps) and gives you the ability to place controls any way you want, as well as implement custom controls.

The set of controls that is added to the map when it is created is specified in the map builder. By default, the 'default' set is enabled, which consists of these controls: search on map, select map type, full-screen mode, zoom slider, geolocation, and the Traffic button. Controls are automatically adapted to the size of the map and the device parameters.

Components that are intended for creating controls are implemented as classes in the control namespace (for example, control.Button).

Controls are programmatically connected to the map object and stored as a collection that is referenced from the controls field.

There is special storage that allows for assigning a string key to a control class constructor. When adding and removing map controls, they may be specified as references to a control instance, or as a key from this storage. 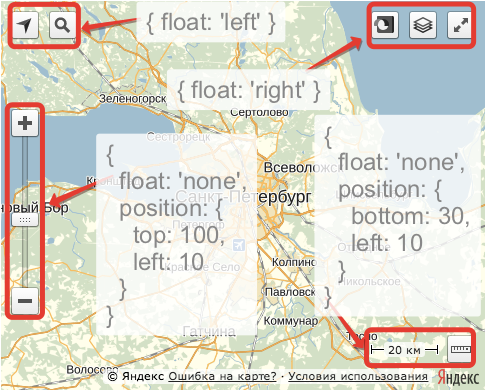 Controls can be placed on top of the map in two ways, which are regulated using the float option:

In the first case, controls will be automatically aligned so that they do not intersect each other. The order of the controls is determined by the floatIndex option (controls with larger values are shown closer to the edge).

The API allows for creating your own custom controls for performing any actions you choose.

Most often, controls are implemented as buttons. Use the control.Button class to create a button control.

Two types of button click reactions are supported: after the button is clicked, it stays down (default behavior), or it returns to its initial state. The type of click reaction is set using the selectOnClick option (true/false).

When a button is clicked, the ../../ref/reference/control.Button.html#event_detail__event-press event is always generated. For buttons that remember their state after being clicked, the select or deselect event is also generated (depending on which state the button was in when it was clicked).

You can set a custom icon for a button (using the image option), as well as a fully custom design template, if the standard one is not acceptable.

The control.Button class implements a control that has a set standard appearance, click reaction, and methods for setting and defining the current state. This button can be included in a composite control.

You can also define a fully custom control that implements the IControl interface. The sandbox has a sample that demonstrates creating a custom control.

The "drop-down list" control provides a convenient view of a list of objects that centers the map when clicked.

The standard controls in the Yandex.Maps API are adaptive, meaning they automatically adapt to the size of the map and the size of the screen. The images below illustrate how the appearance of controls changes depending on the map size.

The zoom control changes its appearance depending on the height of the map, while the other controls change in accordance with the map's width.

Note. Adaptivity only works for controls that have the float: 'left' or float: 'right' option set. The exception is the zoom control. Because it changes its state depending on the map height, its adaptivity works even if it has float: 'none' set.
Controls can take one of three states: 'small', 'medium', or 'large'. The visual representation on the map is defined for each control state:
Note. The zoom control changes its appearance in a slightly different way. For small map sizes, this control is displayed as two buttons; for large map sizes, the zoom slider is displayed in addition to the buttons.

States are managed by control.Manager. When adding another control to the map or changing the map size, the manager checks the state of controls and changes them as necessary. The manager changes the state simultaneously for all the controls that support adaptivity.

If a control's state must be fixed, set the size option for it. This option affects the adaptivity of objects in the following way. If you set one of the three sizes as its value ('small', 'medium', 'large'), the control will always be shown in this size. By default, the option takes the 'auto' value, meaning the control will changes its appearance in accordance with the map size and the number of controls added to the map.

Note. When the size option is set, changes to state.size will not affect the appearance of the control, because the object option takes priority over the state.

The maxWidth option is also defined for each control, as an array of numbers in which each state is assigned a corresponding maximum width. When a control reaches this width, it switches to a more compact format.

The sandbox has samples that demonstrate the behavior of adaptive controls.

Sometimes there are tasks that can't be accomplished using the standard controls. The Yandex.Maps API gives you the ability to create custom adaptive controls.

To create custom controls, you can use the built-in API classes control.Button and control.ListBox. The layouts for the button and drop-down list are adaptive by default. If the controls have both a text and image set, they will change their appearance as follows:

The example below shows how to create a custom adaptive button using the control.Button class.

Note. The maxWidth option must be set for the control to indicate the maximum size for each of the three states. If you pass a number in this option, the control will not be adaptive.